A brief history of the Hôtel-Dieu de Montréal

A brief history of the Hôtel-Dieu de Montréal 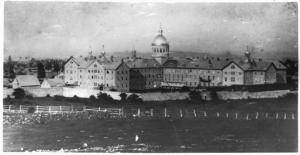 After starting out as a small wooden dispensary within Fort Ville-Marie in 1642, in 1645 the Hôtel-Dieu was the first house to be built outside the palisades. Known as “the house of Mademoiselle Mance”, it became the hub of the nascent colony, its parish and its refuge, and Montréal grew up around it. In 1651, Jeanne Mance protected the settlement from the Iroquois threat by using money intended for the Hôtel-Dieu to recruit a hundred new settlers (the Grande Recrue), saving not only Montréal but all of French Canada in 1653. In 1659, she travelled to La Flèche, France, to recruit three Sisters of the order of Religious Hospitallers of St. Joseph to help her with her work in the hospital. When Jeanne Mance died in 1673, the administration of the hospital was entrusted to the Sulpicians for an interim period of three years before being transferred to the Hospitallers, who became the guardians of the memory of Montréal’s beginnings and of the Hôtel-Dieu and its mission to provide aid and to tend to the sick.

The Hôtel-Dieu burned down three times between 1695 and 1734, destroying written records and vestiges of Montréal’s past. Each time it burned, the Hospitallers rebuilt it with their own money. For more than two hundred years, the Hôtel-Dieu was the only hospital in Montréal. After the conquest of 1760, the hospital continued to care for the sick under British rule, with French- and English-speaking surgeons working side by side until the opening of the city’s second hospital, the Montreal General Hospital, in 1821. In 1861, a lack of space led the Hospitallers to build a new establishment in the country where the “fresh mountain air” would be beneficial for recovering patients, on land that was given to them in exchange for medical care. During this monumental move, the remains of Jeanne Mance and the first Hospitallers were exhumed and buried on the new site, in the crypt underneath the present-day chapel. Since that time, the Hospitallers have lived at the base of the mountain, the present site of the Hôtel-Dieu.

The teaching of medicine at the Hôtel-Dieu began in 1850 when the Sisters agreed to allow students and professors from the Montreal School of Medicine and Surgery into their halls. In 1901, they founded L’École des infirmières de l’Hôtel-Dieu nursing school, which trained more than 3,000 nurses before closing its doors in 1970 following nursing education reforms. Finally, in 1953, the Sisters created a department of clinical research under the direction of Dr. Jacques Genest, which would become one of Canada’s best world-class research facilities.

This hospital was born out of the generosity of both lay people and nuns. Jeanne Mance, founder of Montréal and the Hôtel-Dieu; Madame de Bullion, her benefactor; and Jérôme Le Royer, originator of the Montréal project and founder of the Congregation of the Religious Hospitallers of St. Joseph; were all lay people. They brought the Daughters Hospitallers of St. Joseph to Montréal in 1659 to help Jeanne Mance at the Hôtel-Dieu seventeen years after its construction. This secular-religious collaboration has continued to this day. Like the swing of a pendulum, in the 1960s the Hospitallers set up the Hôtel-Dieu Volunteer Auxiliary Association, which was made up of lay people, to assist them in their mission to provide high quality patient services. At that time, the Hôtel-Dieu was at its peak, with no less than 750 beds. With the introduction of the hospital insurance plan in 1961 and the adoption of the Hospitals Act by the government of Québec, hospital management became increasingly secularized. It was the quiet revolution. The Hospitallers formed a corporation entitled “Hôtel-Dieu de Montréal”. The number of beds decreased to 400. In 1973, a lay man (Yves André) was appointed as Administrator of the Hôtel-Dieu, replacing the last RHSJ Administrator, Sister Thérèse Trottier. The Sisters remained on the board of directors until 1996.

In 1992, Sister Thérèse Payer founded the Musée des Hospitalières de l’Hôtel-Dieu, the only museum in Montréal that traces the history of the origins of the city and its first hospital. In fact, there is not a floor or a corner of the Hôtel-Dieu that does not contain some reference to its history and its origins. Thanks to the Sisters, medallions, crests, statues and stained-glass windows can be found in public spaces and reserved staff areas, and in the pavilions that bear the names of the founders of the Hôtel-Dieu and Montréal.

In 1996, the Hôtel-Dieu, Hôpital Saint-Luc and Hôpital Notre-Dame merged to become the Centre hospitalier de l’Université de Montréal (CHUM). With health care being distributed among the three hospitals and a shift to ambulatory care, the number of beds was reduced to 250. Since that time, the Sisters began sharing their living quarters with the CHUM, whose administrative offices were relocated in the Olier Pavilion, one of the oldest of the Hôtel-Dieu buildings.

In 2010, the CHUM began construction of the first buildings of the new CHUM in the south of the city. The entire medical staff of the Hôtel-Dieu began to prepare for an imminent move. The research centre and CHUM administrative offices were the first to leave, moving into the new downtown location in 2013.

L’Hôtel-Dieu sera vendu, [Hôtel-Dieu to be sold] read the headlines in La Presse on March 28, 2013. Indeed, to help fund the construction of the new hospital, the government asked the CHUM to draw up an inventory of the buildings deemed to be surplus. An interdepartmental committee was created to look into the future of these buildings. Citizens’ committees have been created to preserve its vocation and keep it in the community. For its part, the CHUM employees union, looking to the future of health care and services, has been vocal in its support for saving the Hôtel-Dieu. It may still be possible for the hospital to pursue its original vocation, given the critical needs in the healthcare sector. For the moment, it was announced that health services should continue until 2021.

Finally, in the spirit of preserving tangible and intangible heritage, many are defending the building’s unique historical and heritage nature and vocation in connection with the origins of Montréal. A statement of the heritage importance of the Hôtel-Dieu site was published by the City of Montréal in May 2016. 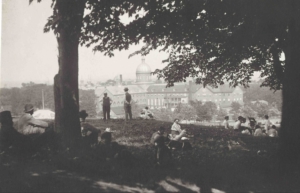